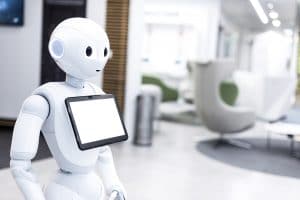 Don’t get too used to your Roomba being the only “robot” navigating around your home. Recent rumors say that Amazon is creating an Alexa “robot” to follow you around your home. If this Amazon Alexa robot was real, what could it look like? What would it do? According to a Bloomberg report, here are some potential answers:

What does the Amazon Alexa robot look like and what does it do?

While the robot is still in the planning stages and not production, here are some of Amazon’s notes on what it looks like and what it does:

The robot is about waist-high on an average height adult, moves around on wheels and using HD cameras.

As far as what it does, the plan is to have the robot follow you around and assist with whatever you need. However, there is no insight on how the robot would actually do this.

To start, you could expect the Alexa robot to act like other Alexa-enabled devices that help answer your questions, tell you the weather and remind you of things during your daily routine.

While the Alexa robot isn’t in mass production, keep your eyes peeled. It is entirely possible that we could be seeing the Amazon Alexa robot in the near future.