Foldable Smartphones Cost How Much? 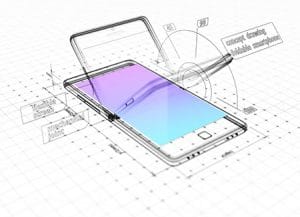 What do Samsung, Lenovo, and Verizon all have in common? Foldable displays. That’s right, these three companies each have a part in creating smartphones with bendable displays. And, their arrival is just around the corner. These smartphones will function just like our current smartphones, if not more advanced.

Whereas the flip phones of earlier days might mislead you, these smartphones with foldable screens are considered “premium phones.” (This means they will be expensive — more on that later.)

Samsung  says they expect that the phones will make use of ultrasonic sensors, instead of the optical kind that other smartphone makers use.

Samsung also mentioned that the unique folding design allows running three different apps at once. You can open up the phone to tablet-size for better media consumption.

However interesting these form features are, a downside is that these foldable phones might not work with screen protectors. The display may be unprotected, risking scuffs, scratches.

When to Expect Foldables

And, remember the debut of the Motorola Razr from 2014? The resurrected foldable version is currently in testing but could launch as early as next month.

Both the Galaxy F and the re-vamped Razr are rumored to run at least $1,500 each, if not more. (This is almost twice as high as current premium phones.) Lenovo and Verizon announced the $1,500 price point; however, Samsung has yet to confirm its actual pricing. Likely, we will know the cost soon enough.