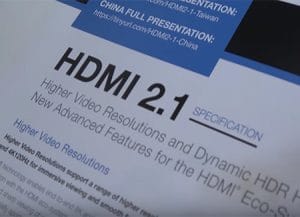 HDMI 2.1 is finally here. Well, at least the TV connections have arrived, meaning that manufacturers released TVs that support this next-generation of connection. However, cables are still to follow.

LG, Sony, and Samsung all announced that their 8K TVs would support HDMI 2.1 connections that are capable of 48-gigabit-per-second (Gbps) transfer speed necessary for the highest-bandwidth forms of 8K.  LG’s high-end 4K TVs will also support the standard connection. Samsung’s 4K TVs will offer some HDMI 2.1 features.

Yes, with these new 8K TV releases you will need new cables for the high-bandwidth 8K signals. However, more on that later in this article.

Be wary, not all HDMI 2.1 is what it seems to be. HDMI Licensing allows companies to claim they support HDMI 2.1 even if they do not check all of the boxes. This means that a TV that can do eARC and VRR but doesn’t support 48 Gbps for 8K can still claim to be HDMI 2.1 compliant.

What cable you really need

HDMI 2.1 cables offer no benefit to a 4K TV. You won’t be able to get your hands on a 2019 model of an 8K TV until later this year. By then there may be more information on cables. Even so, there’s nothing yet in 8K to watch. Right now, your HDMI 2.0 cables are all you need.