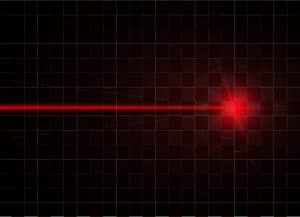 Remember sharing all of your secret messages with your best friend by talking into aluminum cans on a string? Well, now scientists discovered a way to take secretly communicating to a whole new level by using laser-transmitted messages. These laser messages allow you to send a message in the area of another person’s ear without anyone else hearing or noticing.

How the device works

This device uses a process called the photo-acoustic effect to generate sound in the air. However, this process needed one more element to make it work.

Researchers used two different approaches. The first additional instrument is called an “acousto-optic modulator.” This device makes the laser stronger and able to turn into sound. The other way was first to pass the laser through a quickly spinning mirror because this spread out the laser beam.

Although the lasers need to be strong to produce sound, they are not strong enough to damage our eyes.

How the whole process works

At the highest, the researchers amplified the sound to about 60 decibels, which is roughly the same as background music or noise. They were also able to send a message from about 8 feet away.

How the device may be used

Right now, researchers and scientists are still in the discovery stage. Whether this is a device for fun with friends or serious matters like with the military, there are no set plans on how a device like this will be used.