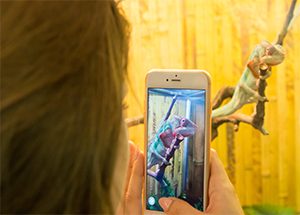 What is Google Lens technology?

Google performed learning projects to teach computers how to recognize objects from photos. From these projects, Google created Lens technology.  In 2017, Google released Lens technology by embedding it within its products like with Google Photos. Google Photos is a mobile phone app that lets people store the pictures they take with their phone. Now, Google has added Lens technology to Google Images as well.

How does Google Lens technology work?

The new AI-powered technology lets smartphone users search for specific things within photos. There are two ways to use the function:

The lens-shaped icon triggers small dots to show up over the selected item allowing the technology to recognize them. If you click on the dots, they should produce similar photos of the selected object from other places on the Internet and link you to them.

For example, if you select a favorite red carpet look, home decor or dog breed. By tracing a finger in a circle around the object in the picture, Google Images will identify and give you results to related image sources like an actress’ dress or shoes, home design websites and blogs, or related images of similar dogs.

Why did Google develop this technology?

The artificial intelligence integration with search is part of Google’s initiative to expand the ways that people search. Google wants to develop a way to search for information that goes beyond words in text and voice. Google also wants to offer people something more to do than just scroll and stare at images. This new function is interactive. It also keeps Google Images competitive to other platforms like Instagram and Pinterest, which have both integrated similar interactions in their feeds.

This technology can identify simple objects right now, but Google has advancement plans so that it can detect things like specific flowers, specific animal breeds, landmarks and more. The feature will not work with lewd photography.

Who can use Lens technology?

This lens tech in Google Images is available for mobile users in the US searching in English. Google also plans to roll it out to other countries, languages and Google Images locations.