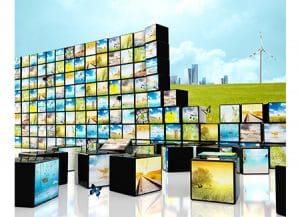 Change is brewing in the streaming market as Disney and WarnerMedia launch their streaming services. With the launch of each, Netflix is being forced to pull popular titles from their library of movies and shows. Additionally, consumers will need to decide between paying more for additional services or losing access to popular titles.

Ironically, while there are more streaming choices than ever, consumers are also more limited to the content they can stream on any given service. Data from digital research firm eMarketer shows that 55% of US households subscribe to a streaming video service, encouraging cord-cutting habits.

Disney Plus is expected to charge $8 to $14 per month, slightly less than a Netflix subscription but with a smaller video library. AT&T’s WarnerMedia plans on adoption a three-tier pricing model. Big streaming services like Netflix, Amazon Prime and Hulu are investing more in their original content in an effort to build customer loyalty.

Media companies are dipping their toes into streaming services primarily for two reasons: data and money. Viewer data allows media companies to build direct relationships with viewers and tailor their services based on that data. By infiltrating the video streaming service market, companies are running the risk of overwhelming consumers. This forces consumers to subscribe to multiple services, which could easily add up to about the same cost as a traditional cable subscription, according to Leichtman Research Group.