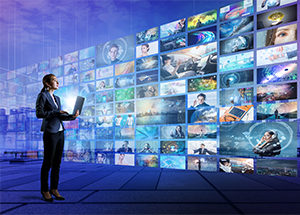 In their Market Snapshot: OTT and Pay TV: Partnerships and Competition, Parks Associates reported that 52% of U.S. households with broadband Internet subscribe both to pay TV as well as at least one OTT streaming video service.

The cable TV marketplace has morphed. Instead of competing against OTT and other video services, partnerships are forming to compliment services on both sides. Consumers are benefitting with a broader range and better choice of content as well as cheaper fees. Pay TV companies instead of being priced out of the game, become add-ons for OTT services that expand customer’s video content choices.

Eleven percent of broadband households in the US currently watch OTA broadcast TV. In addition, pay-TV subscriptions dropped 10% to 77% from 2012 through 2017.

Parks claims, “Approximately 33% of Cord Cutters would have stayed with their service provider if offered a Netflix-style service bundled with broadcast TV channels.”