59% of US Teens Have Experienced Cyberbullying 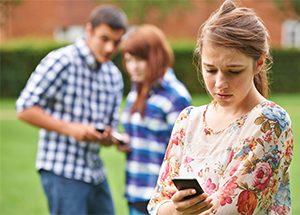 Cyberbullying includes anything from name-calling to spreading rumors online. A study from Pew Research shows that 59% of US teens have experienced some form of cyberbullying.

Smartphones and social media have led to a rise in cyberbullying. Name calling is the most prevalent with 42% of teens reporting that they’ve been called an offensive name online. 32% have had rumors spread about them online. The six primary cyberbullying behaviors are:

39% of girls say they have had rumors spread about them online. Girls are also more likely to have explicit images sent to them.

Teens who are online constantly are more likely to be cyberbullied. For example, 67% of teens who report being online constantly have been harassed online compared to the 53% who use the Internet several times a day or less. Parents are faced with the challenge of educating their child about online conduct.