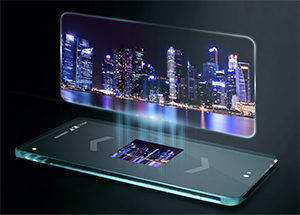 Both Verizon and AT&T have announced that later this year they will offer “the world’s first holographic smartphone.”

The company behind this revolutionary new smartphone is RED, a digital camera company. This past week they talked about their upcoming Hydrogen One smartphone that seamlessly switches between 2D and 3D viewing. The company also touted the new phone as having built-in “holographic multi-view content” for interactive games without a headset or 3D glasses.

Kevin Peterson, AT&T’s SVP of Device and Network Services was quoted as saying “When the RED Hydrogen One launches, you’ll be able to look around, below and into your screen’s image with a 4-view holographic display, which is even better than 3D.”

RED is excited about the phone’s “expansive multi-dimensional audio,” and the high-end RED cameras built into the device.

Along with the new smartphone, RED will offer a channel specifically designed to provide holographic content along with an “ever-expanding modular component system.”