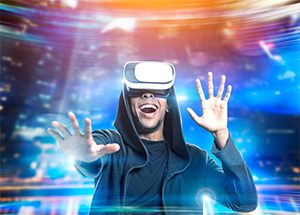 Mark Zuckerburg, Facebook’s CEO, released a new virtual reality headset called the Oculus Quest. He acknowledges that the VR industry has yet to take off with mainstream consumers. However, Zuckerburg is hoping that it will with this new VR headset. He also said that the new Quest device completes the Facebook family of VR headsets.

The Oculus Quest headset costs $399 and will ship during Spring 2019. The headset does not require a personal computer like the Oculus Rift device, and it contains better visuals than the Oculus Go.

The Quest headset is on par with the Rift headset, requiring the same Touch controllers. However, this device will not need tracking sensors that people have to set up in their homes to capture movement. The Quest also allows “six degrees of freedom,” which means that people can move more accurately within the VR environment.

Although VR has not largely caught on with consumers, Zuckerburg has pledged to invest billions more on VR devices and VR content companies.