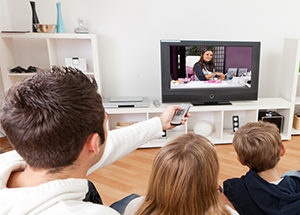 According to a recent report from Nielsen, Americans watched nearly 6 hours of video per day during the first quarter of 2018, a significant jump from the prior quarters. The report shows that 64% of homes have a video-on-demand service and an additional 2.7% of homes subscribe to multi-channel video programming such as Sling, DirecTV Now and YouTube TV.

While the industry is focusing on streaming and on-demand services, linear TV has seen an increase in viewership as well. Adults spent 4 hours and 46 minutes per day watching live and time-shifted TV, showing an increase from previous quarters. Viewers ages 65 and up watch live and time-shifted TV 60% of the time while viewers between the ages of 18 and 34 only watch it 26% of the time. This fragmented media landscape allows consumers to completely customize their TV experience.

The report noted that 4% of all US homes are not considered TV households, but 6 of 10 of those households have internet access that allows them to stream content.